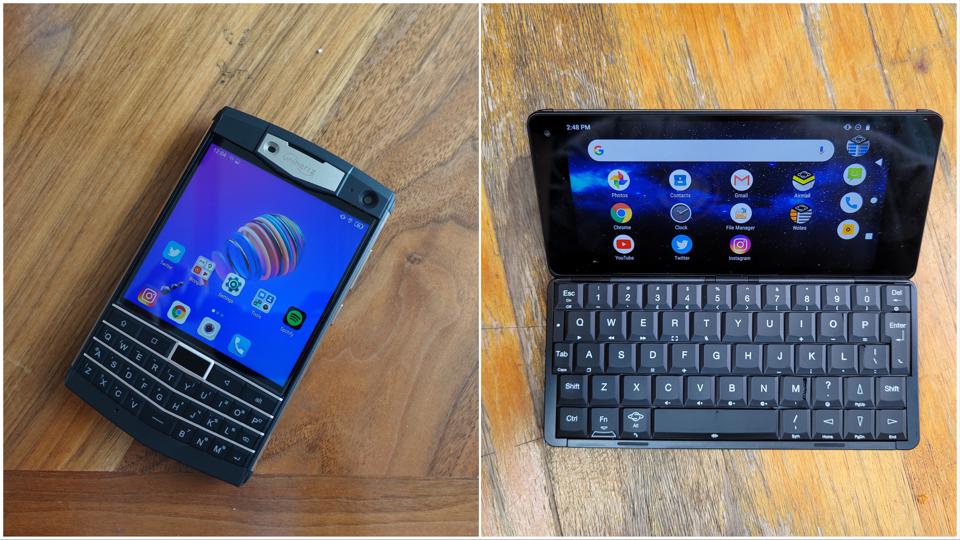 Blackberry’s surprise announcement last week that reports of its demise had been greatly exaggerated—that it is, in fact, coming back in 2021 with a new 5G phone—came at an apt time for me, because I was in the midst of testing a pair of phones which I thought were relics: handsets with dedicated physical keyboards.

Perhaps the Cosmo Communicator from U.K.-based Planet Computers and Unihertz Titan from Shenzhen aren’t throwbacks to a bygone era, but rather a signal of a comeback for late 90s/early 2000s power device? Let’s take a look.

What makes these two devices intriguing to me is because they may both have the same selling point—a real keyboard—but have completely different approaches. Let’s start with the Cosmo Communicator: as can be seen from photos, its form and function behaves more like a mini-sized laptop than a smartphone, but it can still make calls and do smartphone things like go on Instagram.

Those of a certain age may notice that the Cosmo Communicator bear a clear resemblance to the Psion PDA (personal digital assistant), the 1997 device with a cult following among business travelers. That is by design: Planet Computers hired some of the now-defunct Psion designers to help design the machine.

The Communicator has just modest specs—MediaTek P60, 6GB of RAM, 6-inch LCD 60Hz display—but the hardware is excellent. The machine flips open and closes with satisfying force, and the keyboard features individually spaced scissor-switch keys with surprising amount of travel. Best of all, the keyboard, while smaller than a traditional keyboard, is still large enough (about 7 inches diagonally) that touch typers on real keyboards should be able to adjust and type without needing to look down and hunt for keys. I’m a very fast touch typer—average speed on typingtest.com is 108-words-per-minute if I have a good keyboard, and I can still reach about 80 words per minute with the Cosmo Communicator. That I can reach almost 80% of my best typing efficiency on a mobile device is a major benefit for someone who writes long emails on the go like me.

The screen does feel a bit small, especially with the widescreen aspect ratio and thick bezels on the left and right side. The aspect ratio particularly annoys me, as a taller (vertically) 3:2 aspect ratio makes more sense on a work machine. As it is now, some websites with large banners (such as Forbes.com) load awkward on a screen with so little vertical space.

To remedy this, you are supposed to be able to turn the machine sideways to use the screen in vertical portrait mode, but the Cosmo Communicator’s UI refused to switch orientation no matter how many times I twist it. Fortunately, this machines runs Android (the outdate version 9, however), and everything in Android is customizable. I was able to find an app that forces orientation changes and got the feature to work.

Performance overall is fine: there is a small outside screen that allows the user to see notifications and make calls on the dial pad, a great touch that reduces the need to flip open the device every single time you need to do a task.

Overall, I like the machine, and just the ability to let me type much faster and accurately is a major selling point. But there are three major shortcomings users need to know: the built-in cameras are bad—slow to focus, lacking in details, and suffers from over- or under-exposure almost every shot. Standby battery drain is also problematic, as I’d leave the phone at half about charged sitting on a desk over night and wake up to see the battery at 25%. The outside screen seems to turn on at random and drain the battery unnecessarily. At least you can charge via USB-C.

Finally, the device is priced a bit high at £665, or about the equivalent of $880. You’re paying this price just for the ability to type faster on the go, as this device’s screen, speakers, battery, cameras are not on par with even a $300 Chinese Android in 2020. But for those who prioritize getting work done, it’s likely worth it.

If the Cosmo Communicator was a clear tribute to the Psion PDA, then the Titan, from Shenzhen-based Unihertz can be called a tribute to the classic BlackBerry devices. Although in this case, a copycat job may be the better word since no one at BlackBerry was involved.

Lack of originality aside, the Titan has a lot to like: It’s the first keyboard phone of this type to also be a certified “rugged phone,” meaning it’s rated IP67 for water and dust resistance, it’s built of stainless steel and rubber so its shock and scratch proof, and it’s got a huge 6,000 mAh battery that can go two full days even for heavy users. For lighter users, three to four days on a single charge is possible. The phone also supports wireless charging, which is impressive given that’s a feature usually left off inexpensive phones.

The specs here are also modest: The same MediaTek Helio P60 chip with 6GB of RAM, a 4.5-inch LCD screen in an unusual 1:1 aspect ratio, and 128GB of storage. The square screen makes certain apps like Instagram load weirdly, but Unihertz has developed a clever three-finger gesture to force the screen to go into display at a rectangular aspect ratio (with digital letterboxing).

The keyboard will be familiar to anyone who’s used a BlackBerry, meaning it’s more intended for two thumb typing with the device held up rather than real ten-finger touch typing with the device laying on a desk like the Cosmo Communicator. Because the keys are smaller and stiff out of the box, I had a tough time typing at first. But after a day of training my muscle memory, I eventually was able to type on this keyboard faster and more accurately than I could on a standard smartphone touchscreen keyboard. But still, in terms of pure speed it doesn’t come close to what I can achieve on the Cosmo Communicator.

One gripe I have with the Titan’s keyboard layout is that it uses hardware navigation buttons for its Android UI, and the back button is located on the right side, which is opposite of where Android puts the button (on left side) and also against human cognitive logic: we read from left to right, so going “back” is going left.

The cameras on the Titan are far better than the Cosmo Communicator’s, but still nothing to write home about. But considering the Titan is priced at around $450, that makes the average cameras a lot easier to accept.

After using both of these phones for a few weeks, my conclusion is that a physical keyboard is better than current smartphone touchscreen keyboard, and so anyone who needs a device for typing will benefit from owning one.

If these handsets came out a few years ago, I’d say we could be seeing a comeback for keyboard phones. However, in late 2020 it may not make sense because we are just about to enter the age of foldable phones.

Earlier, I said hardware keyboards allow for a better typing experience than touchscreen keyboards on current phones, with the emphasis on the word “current.” The flaw in smartphone keyboards isn’t that the touchscreen keys aren’t responsive or intelligent—in fact they’re very responsive and smart. The problem is there wasn’t enough screen space to make keyboards any larger.

Foldable phones will change that. The upcoming Samsung Galaxy Z Fold 2, according to leaked promo images, can display a keyboard across half of its 7-inch unfolded screen.

This would make touchscreen keyboards far better to use. I can type on this setup probably just as fast, if not faster, than on the Unihertz’ hardware keyboard.

LG, too, is set to release a swivel screen phone that gives more screen space to a keyboard.

Basically, the next evolution of smartphone is going to give us more screen space, which means more typing space. I’m not sure there will be a need for hardware keyboards on a mobile device again once these devices—particularly Samsung’s—hit the market and become mainstream.