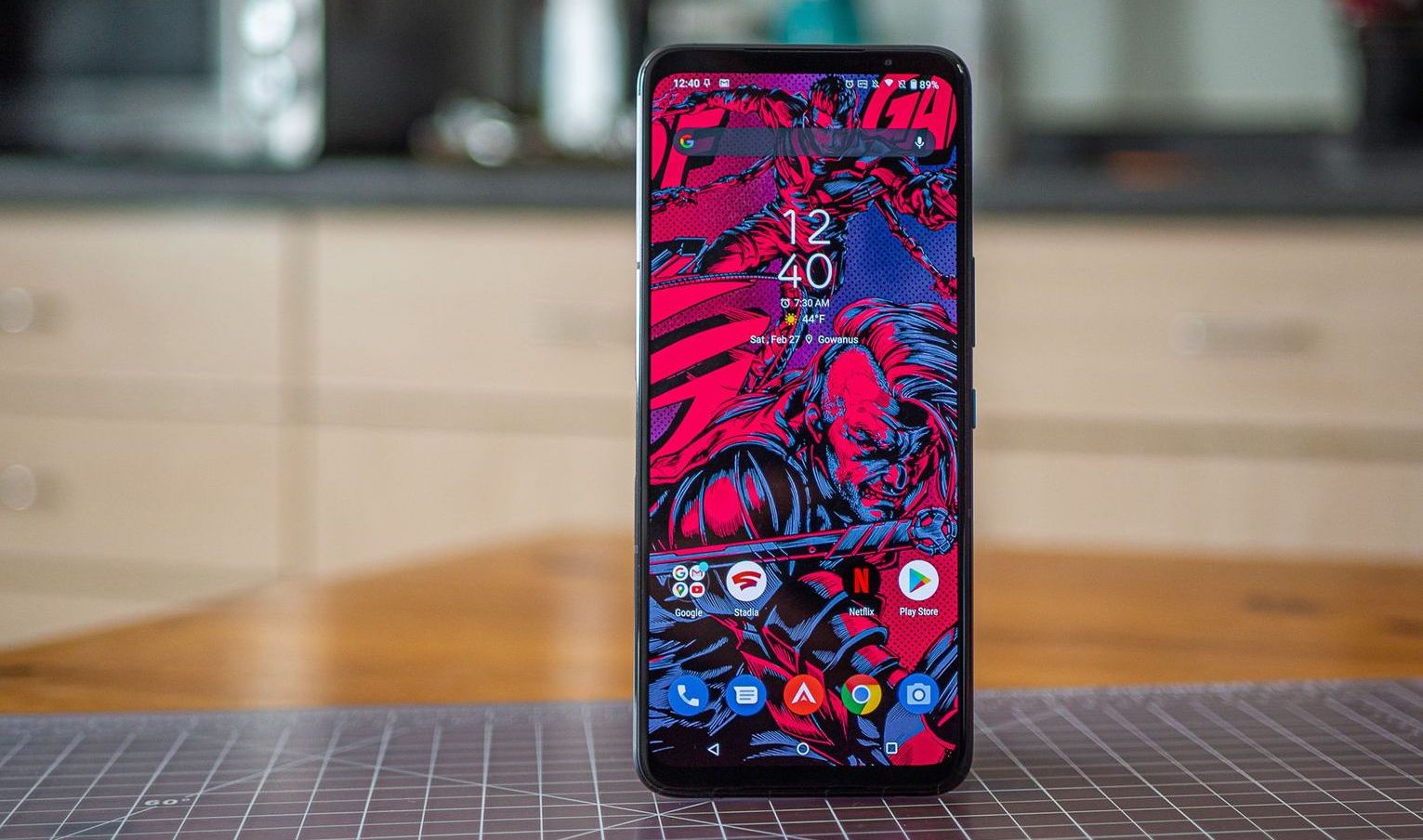 It’s reductive to refer to the Asus ROG Phone 5 Ultimate as just a phone, even if it is one. Sure, it runs Android 11, and it can take calls, snap pictures, and do all of the other stuff every other phone can do. But if its edgy looks and tiny monochromatic OLED screen mounted on its back didn’t already give it away, this phone is different.

This is Asus’ latest attempt (technically its fourth, but it’s skipping that number in the name for superstitious reasons) at building a console-like experience into a phone for a niche but thriving global crowd of mobile gamers. It offers more power and customization than other large-screened phones, both in terms of hardware and software. It’s a real spec sandwich.

For example, it has multiple USB-C ports to let you charge it in either landscape or portrait mode. This model also includes a snap-on fan cooler (its sole job is to keep the phone from overheating when you overclock it), and the fan packs USB-C passthrough charging, a 3.5mm headphone jack, and two remappable trigger buttons. In addition to that, there are some ultrasonic sensors around the phone that can replace some touch controls to make games feel more like you’re using a controller. And for this year’s model, its Armoury Crate app can boost its processor and graphics speed, increase the screen’s refresh rate, and more on a per-game basis.

The Ultimate is Asus’ highest-end ROG Phone 5 coming in May for 1,299 euros (which is around $1,583). But other less expensive options will ship before then, starting in March for around $950. How does Asus justify the $600 price delta? This is the only configuration that has a matte white colorway with a few blue details sprinkled around the phone. And it’s the only one in the lineup — and perhaps the only phone other than RedMagic’s new 6 Pro — that has 18GB of RAM. It’s an impressive spec to find in a phone, but I’m still searching for a use case that requires having this much RAM. The cheaper versions of the ROG Phone 5 ship with 16GB and 12GB of RAM, respectively, which I’m betting doesn’t make a huge difference in performance.

The Ultimate, in particular, seems to be made for only the most diehard of ROG fans. The phone comes with a laptop-sized box filled with a ROG-themed ball cap, towel, face covering, stickers, and more goodies. Aside from the aforementioned specs, the ever-so-slightly less expensive (but still around $1,420) ROG Phone 5 Pro, coming in April 2021, is very similar to the Ultimate. Both phones include two additional ultrasonic sensors on their backs near where your ring fingers might rest while holding them in landscape mode, as well as the rear-facing OLED screen I mentioned earlier called “ROG Vision.” It’s a thumb drive-sized display that’s a spin on Asus’ “Anime Matrix” effect used in the Zephyrus G14 gaming laptop, possibly attracting even more eyeballs at this bizarre-looking phone.

Asus provides preloaded messages and graphics to use for the display that are situational depending on whether you’re gaming, charging the phone, or getting a call on your phone, to name a few, but you can crop your own images to fit within the display, as I did. Anything from a scrolling message with emoji to an image will work, and you can customize it further with an animation, like a static fade or fireworks. It’s like a souped-up version of the LEDs that companies put on the outside of flip phones, or even on Samsung’s Z Flip. The standard ROG Phone 5 has an RGB-backlit ROG logo instead. Some might actually prefer that to having the extra screen.

The ROG Phone 5 Ultimate is a better gaming phone than its predecessors, as well as the competing devices I’ve tried so far from Xiaomi’s Black Shark. For one, it’s the most powerful option out there with the Snapdragon 888 processor and its 18GB of RAM. Every device in the lineup starts with 512GB of fast UFS 3.1 storage, so it flies with opening apps, switching between them, and for other tasks that access storage. Its 6.78-inch FHD+ (2448 x 1080) OLED screen is one of the best I’ve ever used, even if it’s far too large to be my ideal size. Asus kept the 144Hz refresh rate (which automatically adjusts per app for efficiency by default) from the ROG Phone 3, but its touch latency is down to 24 milliseconds here with a 300Hz touch sampling rate, meaning it checks 300 times per second to see where you’ve touched it. The OnePlus 8 Pro has a 240Hz sampling rate, for context. The new RedMagic 6 that’s expected to be far more affordable than the base ROG Phone 5 configuration uses similar display tech, but with a faster 165Hz refresh rate and a faster 500Hz touch sampling rate.

The specs and display used in each ROG Phone 5 make playing games look sharp and run smoothly, and some other features elevate the experience further, whether you’re gaming or watching movies. I particularly love the dual front-facing speakers. They offer the best stereo separation I’ve heard from a phone — to the point where, in most situations, I’m just as pleased to listen to audio aloud at home as I am through headphones. Speaking of, this year’s device sees the return of a 3.5mm audio jack that was missing from the 2020 ROG Phone 3. Asus brought it back with a vengeance, too, equipped with an ESS ES9280AC Pro quad DAC for hi-res audio.

Asus has spent the year refining its Armoury Crate game launcher-meets-dedicated console UI. Its looks haven’t changed dramatically since the Asus ROG Phone II, but in case you’re hearing about this for the first time, it’s filled with so many useful features for gamers. It lets you make a “scenario profile’’ for each game, where you can tweak settings to get more out of each game and, in turn, squeeze more performance from the ROG Phone 5. A profile consists of things like what refresh rate you want the screen to run at, and how much you want to amp up the power of the processor, graphics chip, and RAM. It even lets you turn off network switching, as well as background data and app syncing on a per-game basis. If you’re familiar with gaming on PC, the closest parallel is Nvidia’s GeForce Experience.

A big part of this software — and one of the more compelling features of the phone itself — is configuring AirTriggers. These ultrasonic sensors embedded within the phone can be mapped to emulate buttons so you don’t need to use the touch screen as often. All of the ROG Phone 5 models have sensors along the right edge, so they feel like triggers when you’re holding them in landscape mode. The Ultimate and Pro models add two additional touch sensors near where my ring fingers rest on the phone.

As a way to avoid using clumsy touch controls, AirTriggers are still as handy and clever as ever. Being able to map the jump and attack commands in games like Genshin Impact or Dead Cells actually makes those mobile ports fun to play for me. What’s great is that games don’t need to support controllers for the feature to work. While a game is running, you can move an AirTrigger cursor onto whichever command you’d like to create a “button” for on the phone. In the settings, you can choose whether you want to tap or swipe to issue the command.

I’ve barely scratched the surface in terms of the settings you can tweak. In addition to AirTriggers, you can map motion controls to execute commands. And by clamping the included AeroActive Cooler 5 fan onto the phone, it affords two extra trigger buttons that can be mapped to your liking, plus a kickstand. There’s just so muchcustomization.

Outside of gaming on a PC, I’m in the “controller or bust” camp, and thus, I don’t usually want to suffer through touch controls to play the latest Android games. AirTriggers makes the experience better, no doubt, but it’s still not enough to convert me. Thankfully, for people like me, the ROG Phone 5 Ultimate (and the other new models) supports some modern controllers, like Microsoft’s Xbox One controller, Sony’s DualShock 4, or Google’s Stadia controller. Impressively, the software lets you remap the controls for any mobile game onto those controllers. It detected my Xbox controller immediately when I connected it with an OTG adapter, and mapping the buttons was simpler than I expected.

As for the actual phone stuff, the ROG Phone 5 Ultimate is a high-end phone through and through. It has responsive haptic feedback at every turn, whether you’re getting text messages, tapping your way through Asus’ ROG UI interface (its game-themed twist on Zen UI, which is refined as ever), or using the AirTriggers in a game. Asus told me that it tuned its haptics in-house, and compared to some other Android phones I’ve used, it doesn’t buzz loudly or rattle the phone. It’s what I hope more phone haptics feel like once Qualcomm and Lofelt roll out their haptics framework for other devices running the Snapdragon 888. But as Asus proved with this phone, a company can make good haptics if it wants to. This device has a 6,000mAh battery inside that’s split into two 3,000mAh cells, which Asus says helps with lower charge and discharge temperatures. Additionally, it allows the phone to recharge at 65W speeds, but it lacks wireless charging.

Asus has committed to launching the ROG Phone 5 lineup globally, but it hasn’t shared a specific launch date in the US or official pricing, which is why I’ve been going off a euro conversion. However, the company told me that all of these phones will work on T-Mobile and AT&T, and to that end, they support these carriers’ sub-6GHz 5G networks.

It’s amazing to see what a manufacturer can do when it isn’t worried about making the thinnest design with the best cameras, or stuck on meeting an ultra-competitive price point as the likes of Samsung, Apple, and Google are. Asus wasn’t afraid to get weird here, and that weirdness comes through in several ways that make it a good fit for gamers chasing after the most powerful phone in existence at the moment.

Though, the value here falls apart completely if you think about it too much. For the $1,580 that this phone costs, you could build a very good PC or get a PS5, Xbox Series X, and Nintendo Switch together with change left over. Outside of paying for a phone data plan, this would add about $65 to that if you finance it with monthly payments over a two-year period. While this phone definitely has a leg up on the competition when it comes to power and software features, it’s not worth paying this much to get them. And if you just want to stream games via the cloud with Microsoft’s xCloud service or with Google Stadia, you only need to spend a fraction of this cost to get a phone that can do game streaming well.

Like every gaming phone I’ve checked out yet, the ROG Phone 5 Ultimate is stuck in this weird place of being a very capable device that somehow delivers on its many promises, yet it still doesn’t feel worth the money. For average people who play the occasional game, either directly from their phones or through game streaming services, buying a cheap clip to fasten a controller to your phone will probably be a good enough solution. There are also some comfortable controller setups for iPhone and Android (like Backbone’s Go and Razer’s Kishi for iOS and Android) that can turn most phones into more of a Nintendo Switch-like experience that requires less fuss and far less of an investment than Asus’ ROG Phone 5 Ultimate.