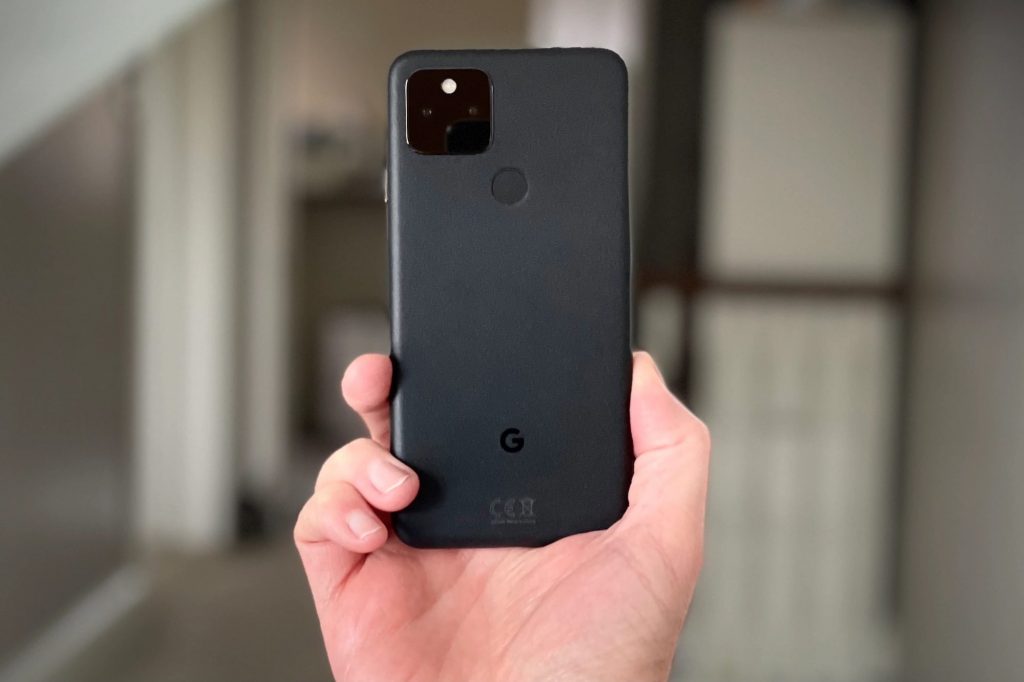 I was drawn to Google’s Pixel 5. So I gave it a factory reset, updated the phone to Android 12, and have been using it as my daily driver for the past several days.

The experience has been fantastic. I’ve got very large hands — an iPhone 13 Pro Max doesn’t look out of place in them — and I prefer large screens, so I don’t think I could fully switch over to the Pixel 5. But it’s such a good “small” phone (by 2022 standards) that I’ve certainly been tempted. The Pixel 5 makes it easy to do anything I need one-handed. Its midrange processor performs better than ever on Android 12, and this phone still looks unique next to the competition.

Above all else, I’ve come away disappointed that Google gave up on the Pixel 5’s style and size after just one year. The smallest phone in the company’s lineup is currently the Pixel 5a, which has a 6.3-inch display. To its credit, Google is shrinking things down slightly with the upcoming 6A. But with the A-series models, you’re giving up niceties like the 90Hz display and wireless charging. In those ways, the Pixel 5 might be the last of its kind in Google’s lineup. So much for the even bezels, too.

I now find myself wishing that Google would keep the 5 around as an “iPhone SE”-style product that gets brought up to speed with hardware upgrades every couple years — without losing what makes it good. Let’s cover some of the Pixel 5’s strengths.

Design and materials: The Pixel 5’s 6-inch OLED display is surrounded by thin, symmetrical bezels that go a long way in making the phone comfortable and usable in one hand. And the textured “bio resin” coating on the 5’s body results in a unique feel and reassuring grip when you’re holding it throughout the day. The volume rocker shares this texture, while the power button is glossy metal — making it easy to distinguish between the two by touch. Owing to its feel and palm-able size, the Pixel 5 is one of those phones that can go caseless without causing much consternation.

Before Google went all in on the common “glass sandwich” design with the Pixel 6 and 6 Pro, previous models in the series often used distinctive materials and textures that helped the phones stand out. With the Pixel 2, it was the almost-coarse rear shell of the black model. The Pixel 4 had grippy side rails. But after the 5’s bio resin — I’m still a big fan of the Sorta Sage green colorway with this finish — Google opted for a more basic in-hand feel with last year’s flagships.

A better screen: The Pixel 6’s OLED panel might seem perfectly fine based on first impressions. But in all honesty, it’s mediocre. There are plenty of threads on Reddit complaining about uniformity issues, an unsightly green tint at lower brightness levels, and other imperfections. The Pixel 6 Pro’s gorgeous LPTO panel exhibits none of these problems, so it’s clear that Google settled for less as part of reaching the 6’s $599 price.

Even the Pixel 5’s screen seems of a slightly higher quality to me than the 6 that replaced it. They’re both 90Hz displays, but the 5’s white point, uniformity, and overall image are just a bit nicer to my eyes. This can sometimes come down to variance between individual units, but I hope to see better from the Pixel 7.

Pixel Imprint rear fingerprint sensor: I’m still let down that phone makers decided in unison to relocate the fingerprint reader from the back of the phone, where your index finger often naturally rests while holding it, to underneath the display. Google’s Pixel Imprint scanners were perhaps the fastest and most consistent in the entire Android ecosystem, and, well, let’s just say the in-screen sensor on the Pixel 6 and 6 Pro has never matched it — even after Google improved the performance through software updates.

Consistent camera performance: Google spent several years optimizing its computational photography for the 12-megapixel main camera shared by the Pixel 5 and its predecessors. And while it lacks the dynamic range of the Pixel 6 / 6 Pro and doesn’t offer features like Real Tone or Magic Eraser, the Pixel 5 is a consistent shooter. You know what you’re going to get, which can’t always be said of the Pixel 6 line. I don’t love the unpleasant-looking background blur you sometimes get from the 6’s larger sensor, but this is something Google will no doubt improve.

Although I’m mostly satisfied with the smooth performance and general responsiveness of the Pixel 5 on Android 12, there are still occasions where the midrange Snapdragon 765G processor hits a wall and gets bogged down. Snap a photo, and the frustrating delay while the phone processes the shot remains present. The 5 can also get hung up if you get overly ambitious with multitasking.

While I’m sold on the Pixel 5’s look and feel, Google’s hardware quality assurance isn’t always the best. Many units have a slight gap between the display and body. After the phone’s release, the company said the gap wasn’t anything to worry about — but it’s exactly the sort of minor detail that I find annoying.

And then there’s that dreadful under-screen speaker, which still sounds tinny in most cases even after Google tried to improve it with an “adaptive sound” setting. Those symmetrical bezels didn’t come without tradeoffs.

But even with those downsides factored in, there’s still something special about this phone. I’ve come close to buying one from Woot, which is selling new, unopened Pixel 5s for $450. Apparently Google must’ve stumbled across some extra inventory in a warehouse somewhere. With Apple’s mini iPhone rumored to be cut from the upcoming iPhone 14 lineup, it seems small phones are on the way out (again). That makes this a tempting moment to buy. The only asterisk to consider in Google’s case is that software support for the Pixel 5 will end in October 2023.

But maybe by then, Google will reintroduce a small Pixel that doesn’t skimp on hardware features and doesn’t so blandly take after its larger siblings.