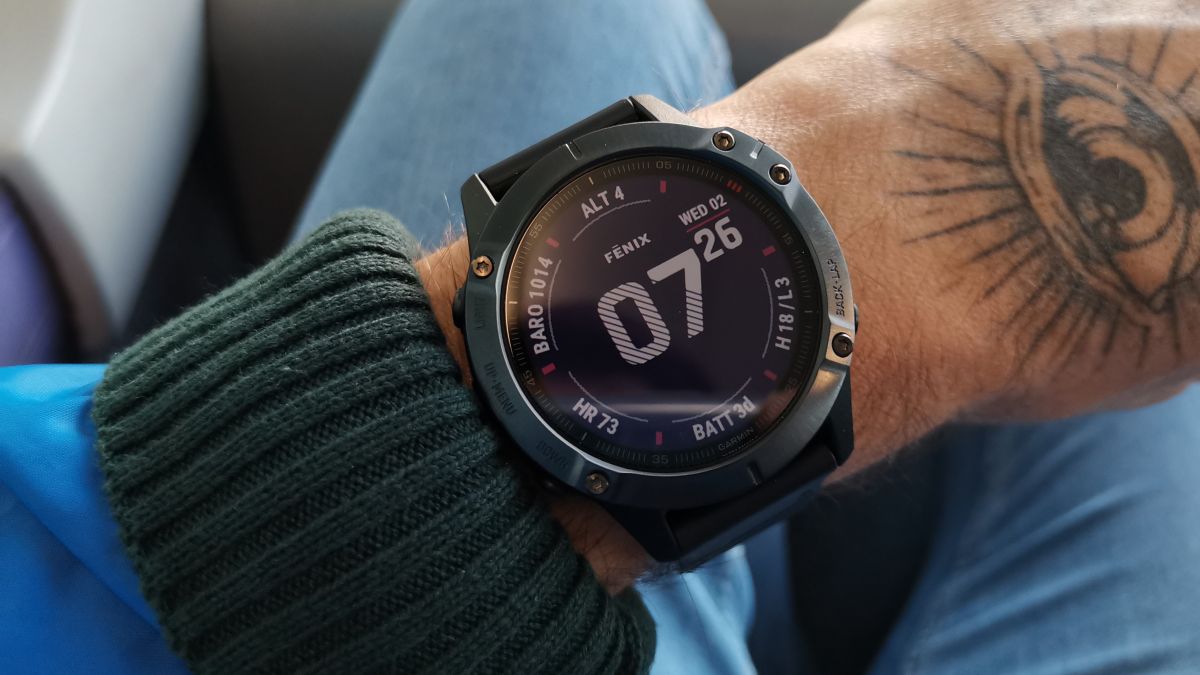 Garmin released its first solar-charging watches in 2019. They use Power Glass to convert sunlight into electricity. However, the models that had it were not the ones most people want.

They were the chunkiest, most expensive watches in Garmin’s line-up. This changed in 2020 when Garmin added Solar as an option to the main Fenix 6 line and the Instinct, which is one of Garmin’s more affordable watches.

They launched with the catchy tagline that you could expect up to “unlimited” battery life. There are, as you might guess, some important caveats to this claim. However, Garmin Power Glass is a useful and clever piece of tech that makes a lot of sense for hikers, if not the average runner who will always use the Fenix 6 Pro Solar’s most accurate GPS-tracking mode.

Where does the “unlimited” bit come in? This is what you might get if you use the Garmin Instinct Solar in its battery saver mode, and the watch sees at least three hours of strong sunlight a day.

Without Solar charging, the Instinct lasts 56 days in the same mode. But you won’t want to use a Garmin in “battery saver” unless you have to as it becomes little more than a watch.

To achieve this the Garmin Instinct Solar only actually has to be able to fully recharge the battery using solar power alone within 56 days. Otherwise the battery would eventually end up draining away.

However, its effectiveness with more active use is still substantial. It increases the Instinct Solar’s standard GPS tracking (with heart rate) battery life from 30 hours to 38.

With the model currently being reviewed, the Fenix 6 Pro Solar, active GPS tracking battery life rises from 36 hours to 40 hours. And battery saver is topped up from 48 days to 80 days.

The lower-price Instinct Solar appears to have a more effective take on Power Glass than the Fenix 6 Pro Solar’s. You can see why in the image below. See those slightly lighter parts? That’s the high density solar charging panel, and there’s a lot more of it in the Instinct than the Fenix 6 Pro.

How does it work?

Garmin’s Solar watches use photovoltaic glass to provide solar charging. The top layer of the screen covering is still traditional Gorilla Glass, and the display MIP layer underneath remains the same.

Garmin’s Power Glass layer sits between these two components. This layer absorbs light, which is then converted into electricity by the solar cells within the glass layer.

Of course, if these solar cells were dense enough to absorb all, or almost all, of the light that hits the glass you would not be able to see through it. This is why the main part of Garmin’s Power Glass uses a relatively low density of these tiny solar cells.

A ring around the edge of the Power Glass disc has a greater density of these solar cells. It can generate much more electricity per square millimetre. But if Garmin used just this outer disc, its solar-charging screen would seem a little disingenuous.

There’s a dedicated screen for the feature, which shows a graph of the current chart level and that of the past six hours. The high brightness required is one reason you should be glad Garmin did not over-promise and show effectiveness stats after giving the watch 50,000 lux worth of light for six hours a day.

Three hours per day is at least feasible if you spend all day outdoors with mixed light levels. Power Glass is effectively a trickle charger for your watch’s battery. And, to be honest, I would not really notice the benefit given how I use Garmin watches.

The Garmin Forerunner 645 is my day-to-day run tracker watch. It need to record maybe two hours of GPS tracked runs a week, and occasionally it takes on duties as a heart rate strap for indoor cycling.

I don’t tend to wear it 24/7, so even if it had Power Glass it wouldn’t see enough of the sun to make the most of the hardware. For city-swelling Garmin fans, it is only likely to, at most, shift the day on which you’ll need to charge your watch. And that is already not a problem with any Garmin.

They all last a very long time. Power Glass is only likely to be of particular benefit to someone who will be away from power sources for extended periods of time. And you have to wonder whether a tech-loving hike-camper would not be tooled-up with enough external batteries already, what with having to keep a phone on hand for emergencies and scenic-looking photos.

Are there any downsides?

Despite having a screen layer that absorbs light, a Solar Fenix 6 actually has better visibility than the Sapphire version, because that kind of “crystal” glass is highly reflective.

Gorilla Glass, used in Garmin’s Solar watches, is not as hard as Sapphire, though. They will therefore be more prone to scratches and scrapes. Cost is the number one factor to consider for most, though. The Garmin Instinct costs $200 less than the Instinct Solar.

Solar charging makes more sense in a Garmin watch than any smartwatch, and almost any other fitness tracker. However, if you’re the kind of Garmin fan, like me, whose runs, walks and bike rides tend to start and end from a tech-filled home, you should seriously consider whether the tech if worth the expense. Even if Garmin has worked it into the Fenix 6 Pro Solar and Instinct Solar very well, and almost invisibly.