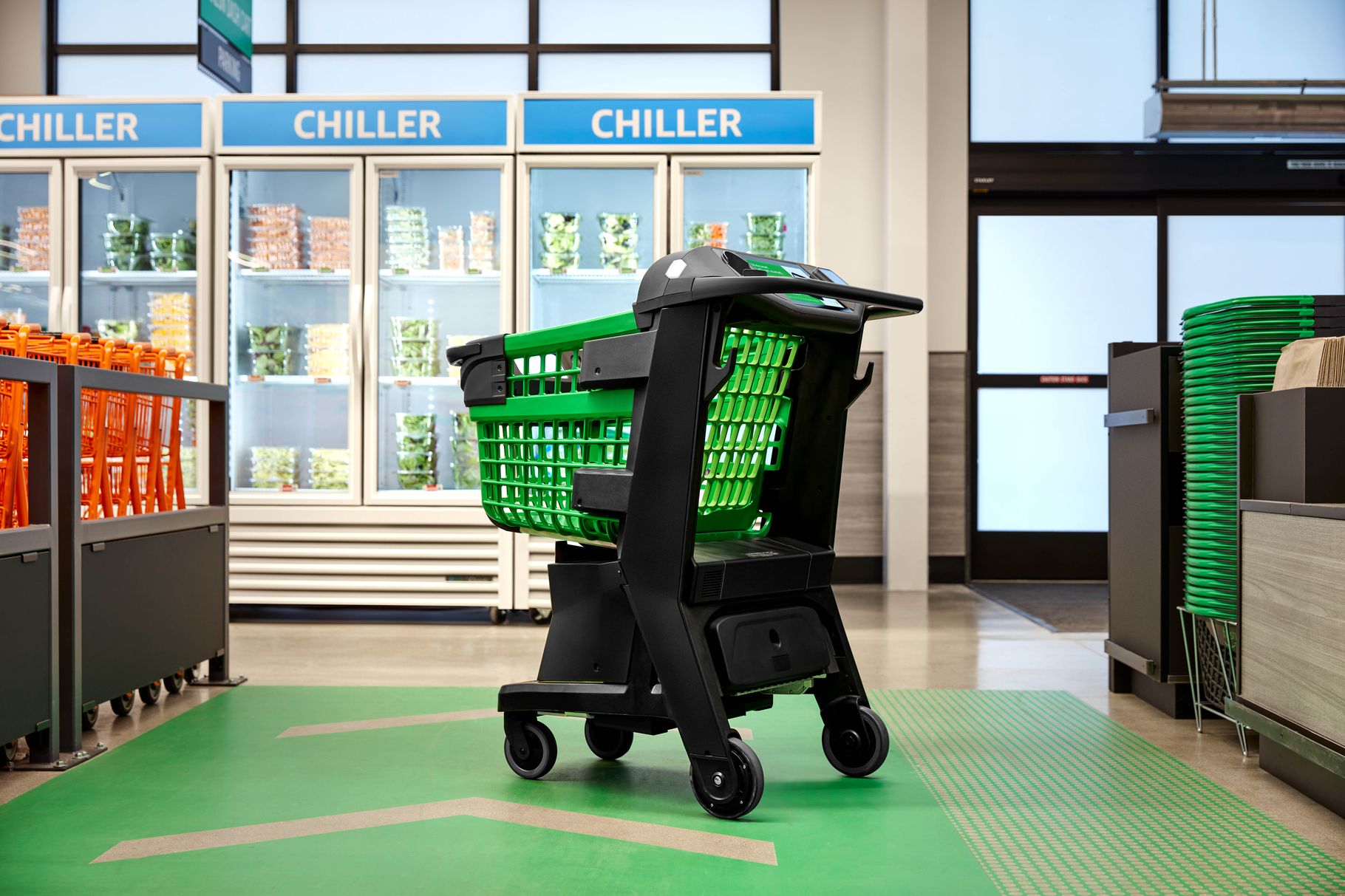 Amazon is expanding its real-world footprint with another unconventional physical product: a shopping cart. While it certainly looks like an aesthetic upgrade to your standard grocery store cart, the Dash Cart, as it’s called, is in fact a smart version of the tried-and-true food transport vehicle.

It’s equipped with a touchscreen and other various hardware components to automatically detect what items you’re placing inside and even how many of those items you’ve picked off the shelf. When you’re done shopping, you’re allowed to take the cart through a special lane that checks you out digitally without requiring a human cashier to ring you up.

The idea builds on Amazon’s approach of trying to take the convenience it’s mastered in the digital realm and bring it into the real world. For years now, Amazon has been trying to apply all the learning its picked up from developing Alexa-powered products, including microwaves and wall clocks, and establishing a brick-and-mortar presence through its Whole Foods acquisition and growing Amazon Go store network. Those efforts are now resulting in hybrid products that bridge the digital and physical, if only in small and experimental bursts.

The Dash Cart is coming first to Amazon’s grocery store in the Woodland Hills neighborhood of Los Angeles. The store, first confirmed last year, is not an Amazon Go store, meaning it does not have the cameras, sensors, and other equipment built into the ceiling for automatically detecting items you take off the shelves. Instead, this is your standard, everyday grocery store, only it has smart Amazon-made grocery carts for you to use. The store is up and running for fulfilling online grocery orders, but the physical space isn’t yet open to the public; Amazon says it’s aiming to open the store later this year. The store joins Amazon’s network of existing Whole Foods locations and its larger-format Amazon Go grocery store that opened in Seattle back in February.

It’s not clear why Amazon is opting for a more traditional store, given its more than two dozen Go stores and a planned second Go Grocery in the works for the Redmond area of Washington. On one hand, it could be that the Go model is hard to scale at the size necessary for a full-service grocery store; the Go Grocery in Seattle is on the smaller side, while the new Woodland Hills location is reportedly at the site of a former Toys “R” Us, which is certainty much larger. There’s also the privacy question, and whether the Go format’s tracking and surveillance approach is maybe not as palatable as a smart shopping cart a consumer must opt in to use.

That said, it does seem as if scaling its cashierless approach either from a privacy perspective or a technical one is a challenge Amazon is trying to overcome, and the cart is one to do that in a small and manageable fashion. For now, Amazon isn’t ready to use the Dash Cart technology beyond low-key grocery trips. So the device can handle up to about two bags of items, but it can’t do a full cart quite yet. That means the Woodland Hills store will have standard carts and standard checkout lanes for all the customers who are shopping for more than what the Dash Cart will allow.

But other than that, Amazon’s Dilip Kumar, the company’s vice president of physical retail and technology, tells The Verge everything else is fair game, including produce and other food items not contained in traditional packaging. “[The Dash Cart] has a ring of cameras, a scale, and computer vision and weight sensors to determine not just the item, but the quantity of the item,” he says. For an item like, say, an apple, the touchscreen on the cart itself allows you to input the price look-up code of the item before you place it in the cart to be weighed and added to your order.

The cart processes your order at the end of the trip only because you’ve first signed into your Amazon account on your phone and scanned it at the beginning of the grocery trip. The cart also has a coupon scanner built in and supports Amazon’s Alexa shopping lists feature. When you finish shopping, Amazon says dedicated Dash Cart lanes let you just exit the store without dealing with payments or waiting in a checkout line.

Amazon isn’t saying whether this cart will make it out of the Woodland Hills store, as the company doesn’t typically talk about new locations or even future plans regarding its physical grocery store expansion. But there is a good chance that, in the event the Dash Cart is a hit among consumers, Amazon could be rolling this out elsewhere. It’s easy to see, for instance, how such a device might function in a Whole Foods store and help cut down on checkout times, although perhaps there might even be waits to use the carts themselves, if it works as well as advertised.