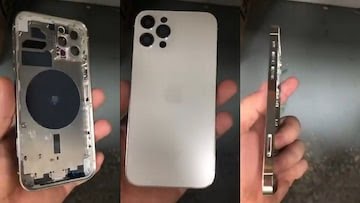 iPhone 12 Pro is expected to be one of the four iPhone models that Apple will launch this year.

iPhone 12 series has been subject to a multitude of leaks in the past weeks, from its specifications to production issues to live videos of the phone. The latest in the growing list of leaks is a video showing the back panel, without any internal hardware, of the iPhone 12 Pro with new LiDAR sensor placement. Also, another leak mentions that the iPhone 12 series went into mass production this week and unfortunately, the rumoured 120Hz refresh rate display did not make the cut.

Starting with the 6.1-inch iPhone 12 Pro’s back panel, a short clip was shared by a known tipster with the pseudonym EverythingApplePro on Twitter, showing the LiDAR sensor placement, flat sides, smart connector, and various cutouts. The space for the wireless charging coil can be seen as well. The design seems to be similar to what Apple did with the iPhone 4 and iPhone 5 that had a more boxy shape. The triple camera setup, as seen in the video, looks quite similar to what was present on the iPhone 11 Pro and the iPhone 11 Pro Max.

The SIM card tray seems to have moved to the right side of the phone. This leak suggests that Apple will be fitting the LiDAR sensor in both the Pro models and not just the top-end iPhone 12 Pro Max, as previous leaks had stated. Although, a more recent leak did mention that both the Pro models will come with this feature.

In other news, Apple announced it will host a ‘Time Flies’ event on September 15 where it is expected to unveil a budget Apple Watch, Apple Watch Series 6, and two iPad models.