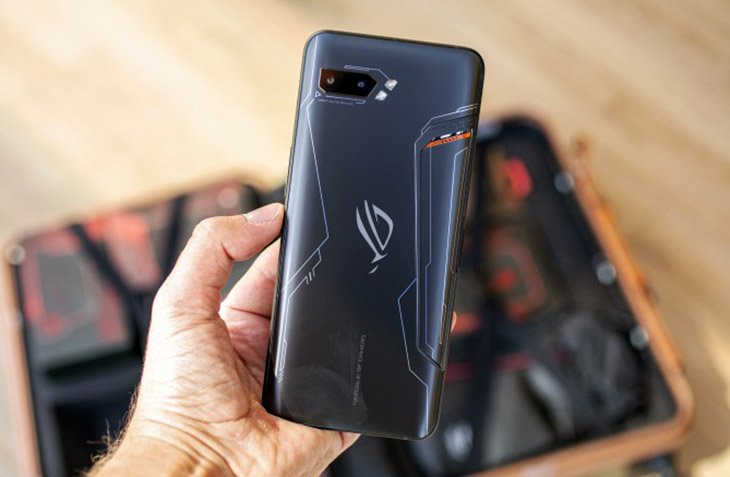 The Asus ROG Phone 3 is perhaps the phone that comes closest to a gaming PC yet – there are tons of accessories for different gaming styles and everything is under your control. No, really, everything: you can control the chipset’s clock speed and throttling threshold, set up the screen and audio for an optimum experience, tune the network to avoid hangups, even charging is entirely customizable.

The ROG Phone 3 is among the first Androids to be powered by the new Snapdragon 865+chipset. There’s a “ROG Phone 3 Strix Edition”, which uses the non-plus version of the S865 chip, but here’s why you might want to consider for the more premium versions.

First, it’s the first mobile chip to have its CPU hit 3.09 GHz. That, plus an overclock to the GPU brings a 10% performance improvement over the vanilla S865. Also, the plus supports Wi-Fi 6E, which works in the 6 GHz band and offers both more bandwidth and lower latency – with the right router, sub-3 ms is possible.

The main version packs more RAM and storage to boot. You get 12GB RAM as standard and you can go up to 16GB if you want and your budget allows it. Storage starts at 128GB and goes all the way to 512 GB. For comparison, the Strix starts at 8GB of RAM and offers a choice of 128GB and 256GB storage. In all cases you’re looking at fast LPDDR5 RAM and UFS 3.1 storage. Note: there are some regional variations in the memory configurations available.

This time Asus included the AeroActive Cooler 3 into the retail package. There’s a vent on the back of the phone, allowing the fan to blow on the enlarged copper heat sink (6x larger than the ROG Phone II). The vapor chamber has been redesigned as well. By the way, the vent means that the ROG Phone 3 is definitely not water resistant.

All this is done to ensure that the chipset can hit 144 fps. The new 6.6” AMOLED screen offers 144Hz refresh rate, though from the settings you can also choose 120 Hz, 90 Hz and “auto”, which will pick the most efficient setting for the task at hand.

Asus reworked Android’s internals to achieve 25 ms touch latency (270 Hz touch sampling rate). This is the lowest of any current smartphone, says the company. The screen paints a pretty picture too, with HDR10+ it has 1 billion colors drawn with a deltaE < 1 and covering 113% of the DCI-P3 gamut.

The phone’s ultrasonic shoulder buttons have been made more customizable. You can split each into two buttons if you need additional controls or use them as for slide gestures to adjust the game camera’s angle.

As you can imagine, the Asus ROG Phone 3 has been designed with landscape use in mind. Probably not to the extent that the Lenovo Legion Phone is, but you still get bezels around the screen – they keep your palms away from the screen and leave enough room for two powerful front-firing speakers. Asus tapped Dirac to help tune the speakers to reduce cross-talk, correct the frequency response curve and impulse response. Also, you have a per-game equalizer so you can tune the audio on each separately.

The AudioWizard has presets for every ROG headset – ones with a 3.5 mm jack, ones with USB and wireless headsets as well. A note about 3.5 mm, there’s no jack on the phone this time, but most accessories (including the AeroActive Cooler) do add a jack.

The phone comes with a 6,000 mAh battery and supports 30W fast charging over USB Power Delivery (same as the second gen). Asus says that a 46 minute charge will push 4,510 mAh into the battery, achieving a 70% charge. Most fast charging solutions start to slow down at 70% (to protect the battery), so a smaller battery with a faster charger would achieve less.

The Asus software gives you full control over charging, if you’re the type to worry about battery health. You can cap the max charge at 80% or 90%, you can limit charging speed to 10W or put it on a schedule, so overnight charging reaches 100% just as you’re about to wake up.

Asus finally added a third camera on the back of the ROG, but it’s just a 5 MP macro cam. The main sensor has been upgraded to the 64MP IMX686, which supports “lossless” 2x magnification at 16MP resolution. The second camera is a 13MP ultrawide-angle shooter (125°).

The main camera can record 8K at 30 fps or 4K at 120 fps. There’s a HyperSteady Video mode and a Wind Filter, leveraging the phone’s four mics placed all around. The selfie camera has a 24MP sensor.

The Asus ROG Phone 3 comes with Android 10 out of the box with two launchers – the gaming-inspired ROG UI or ZenUI. Both are pretty close to stock, through they feature a number of internal optimizations to ensure you get the best out of the hardware.

Let’s briefly dive into the selection of accessories:

We’ll start with the redesigned ROG Kunai 3 controller. Two detachable halves add an analog stick and several buttons each. These can be docked to the side of the phone (using a bumper case) or attached to a the Kunai 3 Charger to form a console-like controller (perfect for use with the cooler’s kick stand).

The grips are detachable this time and there’s a carrying case included in the package, making the Kunai easy to transport. If you prefer to use a DualShock or Xbox controller (or others), there’s a Gaming clip.

The TwinView Dock 3 has been upgraded to match the screen on the phone – 6.6” AMOLED with 144Hz refresh rate. If you have the second-generation dock, you can use that too (though only at up to 120Hz). The dock has a 5,000 mAh battery to extend play time and it can be used with games that support dual screen play or the additional screen can be used to monitor chat while you stream.

The ROG Lighting Armor Case 3 has a new design – the back lights up with the ROG logo. This is fed by an RGB led on the back of the phone and can be synced with the X-Mode that animates the live wallpapers on the screen.

As with previous generations, there is a Professional Dock that breaks out several USB ports, an HDMI and Ethernet ports too. The Mobile Desktop Dock does the same, except with even more port (including two Display Ports, one of which can act as input).