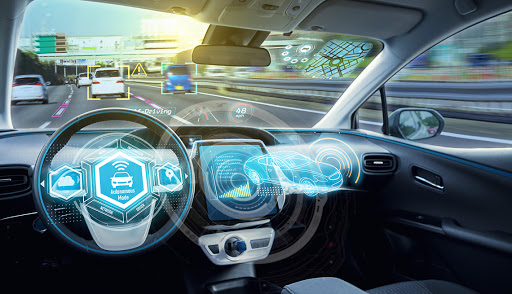 Riding in robocars will turn us from drivers into passengers. Some people don’t like being passengers, and get motion sickness they don’t feel when they are the driver. This can be worse if they try to focus on reading or watching a screen, particularly if looking down and away from the road. Some people are happy working on their phone while a passenger, others can’t stand it. Many feel better if the phone is held high so that their peripheral vision takes in the view out the window.

It’s long been known that a prime cause of motion sickness is that a disagreement from what your eyes see and what the balance sensors in your ears tell you. When you can’t see the outside world, particularly the horizon, trouble can ensue. On a boat, staring at the horizon can be a quick cure, if you are somewhere that’s easy to do.

A robocar is always driving on a plan. It knows when it’s going to change speed, or turn. As such, way back in 2008, I proposed that robocars should signal movements in advance in some subtle way, and in particular, I imagined almost unnoticeable audio cues could be a good approach, and reiterated this in 2015 and 2018. While I was unable to get research going into this at Waymo, recently a project at Volvo learned that this technique does indeed reduce carsickness. Some enhancements included the use of panning stereo sounds which moved with planned turns. 17 out of 20 riders preferred riding with the sound cues.

The ideal would be cues the rider is not even aware of, which prepare the brain in an unconscious way. A more blunt approach will simply be to give people the feeling they should look up because a turn is coming, so they are not surprised by the acceleration.

In addition, vehicles may be designed with ways to keep the screen up high, so that one can look at it while also seeing the outside world. Some robocar designs don’t let people see very well out the front window (indeed, once you take out the driver the large front windshield and rear window no longer are needed, and they add a lot of cost and some safety risk.) Some riders however, will appreciate the ability to see out.

Long term, though, there may be potential to simply eliminate shear forces from turning and acceleration. When you fly in a banking airplane, you don’t feel the turn because the plane tilts so the acceleration is downward. You just feel a bit heavier, you don’t sway side to side. A robocar could tilt the entire passenger compartment, or just the seats, using actuators, so that all acceleration forces are up and down, so all you feel in increased or decreased weight. This should increase comfort, and also mean the liquid in a drink cup would always stay level. This is the ultimate form of “active suspension” that can also eliminate bumps from the road based on maps or laser data about the road surface. The robocar of the future should be able to take you on a winding road with a washboard surface, and not even produce ripples in your drink — or in your inner ear or bones.

An even greater option from an articulated passenger compartment would be one that, for a single passenger at least, could spin. A spinning passenger compartment, in the event of an impending accident, could — as quickly as is safe — rotate the passenger seat so that their back is to the impact, while braking to gently push the passenger against the seat. In that position, a very high impact could be sustained without injury, without need for a seat belt or airbag. (The belt is still useful if multiple impacts occur.)

Right now, some robocar designs offer face-to-face seating, which is definitely more social when you have a group that wants to socialize. Some people are not as comfortable riding backward, though in a group typically such people can be given the forward-facing seats. Facing backward is safer in a forward crash — though based on Waymo’s results from their testing, forward crashes (which are often the fault of the driver) are rare compared to crashes from the rear and sides. You ideally would want to sit facing away from the most likely direction of a crash, but be turned at the last second if a different direction is called for. Robocars will be likely to know when a crash they can’t avoid is coming, even seconds ahead. They will try to evade but may not be able to do so, but in this case they could prepare. Today’s simpler cars do that to a limited degree already, tensioning seatbelts and making other preparations.

This paints a picture of a ride in the future. You can sit and relax, or look down and work. Like on a big airplane, even in a middle seat where there is no view of the outside world, you will at most feel slow increases and decreases in weight, and audible cues you are barely aware of will prepare you for them for a pleasant and safe trip.