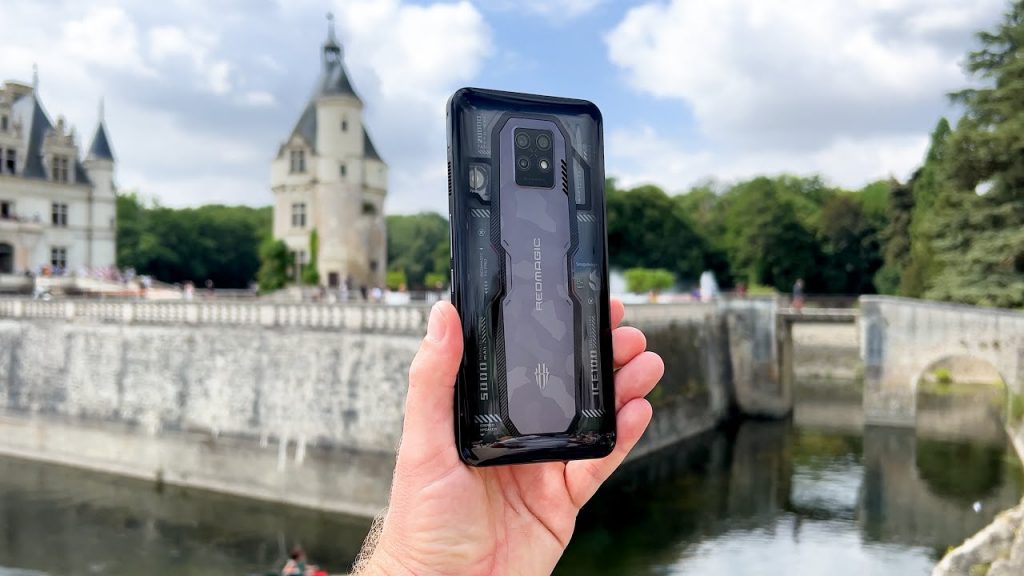 The new, Nubia Redmagic 7S Pro is now available worldwide. It’s a slight upgrade and refresh of the Red Magic 7 Pro from earlier this year and features all of the latest and greatest tech packed into a smartphone made for gamers or those looking for the ultimate in performance.

The 7S Pro has it all including a semi-transparent back, RGB lights around the active cooling fan, and customisable gaming touch-triggers.

The Redmagic 7S Pro is nothing like a traditional slab-style phone thanks to several unique and innovative design features. The front selfie camera is hidden under the display for an uninterrupted viewing experience. There’s also an under-display fingerprint reader for fast and reliable screen unlocking.

The phone is available in three colour finishes including Obsidian, Supernova and Mercury. You also get a transparent rear cover that doesn’t fully cover the back since the middle section is metal and needs to dissipate heat from the powerful internal CPU and GPU.

The 7S Pro is a large phone with a massive 6.8-inch AMOLED display. Despite being 235g, it’s nicely balanced which makes it feel lighter. For context, the iPhone 13 Pro Max is slightly heavier at 240g, despite having a smaller 6.68-inch display.

One of my favourite things about the front display is the lack of any visible selfie camera. This is because Nubia went with their under-display invisible, selfie setup. No matter what’s on the screen, it’s really difficult to see unless you’re staring at the phone from a very strange angle. This brilliant tech does come at the cost of image quality, but I’m more than okay with this as the front shooter is the least used of all the cameras on my smartphone. I rarely use this camera outside of testing or video calls and while the image quality isn’t as good as traditional cameras, – I’d rather have the full-screen experience than a better selfie camera that interrupts the image on the screen. This means a 92.7% screen-to-body ratio with minimal bezels all around, and essentially a distraction-free viewing experience.

Around the back of my review unit (Supernova) is a transparent material that allows you to see some of the internals of the phone around the edges. The middle section is metal with a silver/grey camo design along with the RedMagic branding. At the top of this are the three rear cameras and LED flash. The rear makes for a distinctive and stylish look that you won’t see on any other phone.

There’s a built-in fan with RGB lighting for cooling and when the fan is on, it’s got some RGB lights that illuminate it for a very cool look.

On the left edge is a red slider button that’s a shortcut to the Redmagic gaming dashboard game space – a central place to store all your games.

On the right side, are familiar power and volume buttons, but above that is the exhaust vent for the fan. You also get the two touch-sensitive trigger pads on this side that can be configured to trigger touch in games. On the top edge, there’s a 3.5mm headphone jack which is alongside one of the loudspeakers. There’s a second speaker at the bottom, as well as the USB-C port, and a dual SIM card tray.

Unfortunately, there’s no expandable storage, but it comes with up to 512GB of fast UFS 3.1 storage, so I don’t see this as a problem.

The 6.8inch AMOLED is stunning with a full HD 2,400 x 1,080 resolution for a total pixel density of 387 pixels per inch. It also features a 120Hz refresh rate for silky smooth scrolling and of course, games that support it will also benefit from the higher refresh rate.

With a peak brightness of 600nits, It gets plenty bright for gaming indoors or for watching videos, but I found the auto brightness feature isn’t as smooth or as quick to respond to changes in the ambient lighting as I’ve seen on other phones. This should improve with future software updates.

The 120Hz refresh rate makes it feel extremely quick and snappy whether you’re scrolling through webpages or swiping through the Redmagic OS 5.5 skin that sits on top of Android 12.

For gaming, the screen touch sampling rate can be clocked up to 960Hz. Most people wouldn’t ever need something like this but if you’re into gaming, it can give you an edge.

The stereo speakers have a spacious soundstage that’s not only great for games but for watching movies or listening to music. They can get plenty loud and are clear and crisp.

The phone supports audio through USB-C and via the 3.5mm headphone jack. I love that I was able to use some of my wired gaming headsets for the fuller sound they provide. I also tested the 3.5mm headphone jack with several wired IEMs that worked well with the decent built-in DAC (digital audio converter). Of course, there’s also Bluetooth 5.2 that can be used to pair audio devices and peripherals.

The Redmadgic 7S Pro is the most powerful phone I’ve tested. In all the benchmarks I ran it outperformed everything else. One of the things that helps the performance is the active cooling system that keeps the internal hardware cool so that it can sustain the insane speeds regardless of what you’re doing. Whether you’re playing the latest games or charging your phone at ultra-fast speeds, the built-in fan and vapour chamber will ensure the system stays cool and at peak performance. The fan can be manually controlled or set to come on automatically when needed. By default, it will turn on when playing a game or while changing.

In the 3DMark Wild Life Extreme Stress test, I achieved a score of 2,816 with the lowest of the 20 consecutive stress tests 2,803. For reference, the iPhone 13 Pro was able to record a high of 3,097 but the lowest loop was a massive drop to 1,985. This shows just how effective the cooling system is in stabilising the heat generated while gaming.

Powering the Redmagic 7S Pro is the latest Qualcomm Snapdragon, 8 Plus Gen 1 processor, a bit faster and more powerful than the standard 8 Gen 1, especially for graphics.

Obviously, the performance of this phone for gaming is the primary draw. You get a tonne of add-on customisations in addition to the fact that it can play almost every game at its highest graphics settings. Additionally, you may modify the CPU performance for each game using the Nubia gaming space. You can also change the touch sampling rate from the standard 480Hz to consume less power or 960Hz for the quickest response at the expense of higher power usage. In the performance tab, you can use eco, balance or rise for the maximum performance from both the CPU and GPU. Many games won’t need the extra boost in performance but some of the more demanding titles will.

The excellent custom touch triggers may be set up to correspond to any game onscreen buttons or controls you like. They’re accurate and easy to reach and feel for.

It’s all about the games

I tested a lot of Android games on the Redmagic 7S Pro since this is what the phone is designed for. Yes, it’s a great phone for everyday use with super fast scrolling through your social feeds on the large screen and the excellent sound system makes it ideal for general media consumption but most users will buy this phone for its gaming features.

All of the games I ran from Real Racing 3 at a steady 120fps to Genshin Impact at 60fps with maximum graphic settings look, sound and play unbelievably. I also played Apex Legends Mobile, Call of Duty mobile, Modern Combat Versus, League of Legends Wild Rift, Knives Out and Asphalt 9 Legends. All of these games ran at full graphical settings with no issues while being able to maintain their maximum FPS setting.

Android is also an excellent way to play retro games via emulation so I fired up the PS2 version of Rachet and Clank and Tekkon 4 at 2x graphical resolution on AetherSX2. The ability to play games like this in emulation mode is another way of getting the most from a gaming phone like the RedMagic 7S Pro. Nubia does have accessories for the system, but I didn’t have any to test, so instead, I used the GameSir X3 as a controller for the retro games I played.

If you have a PC you can download the free Redmagic Studio software. This supports up to 120fps wireless projection. Take mobile gaming onto the PC with mouse and keyboard controls for a better gaming experience. You can also connect the phone to a TV or monitor via HDMI and USB-C for some big screen action.

The Redmagic 7S Pro comes with a large 5,000mAh battery which is shared between two physical packs. The phone comes with a 65W charger in the box and it took me 30 minutes to charge it from 20% to 100%.

Unfortunately, there’s no wireless charging option but this isn’t surprising considering the way the back of the phone is designed.

For normal, non-gaming use, you’ll get at least a full day from a single charge, but far less when you play games. How much time you get when gaming will heavily depend on the game you’re playing and what graphical and performance settings you use. The ability to be able to quickly fill the battery back up is a massive bonus though.

One of the most comprehensive collections of filters, tools, and shooting modes I’ve ever seen in an app is available in the camera app. Obviously, some are more beneficial than others. However, a lot of what’s here isn’t typically found on some other devices.

You also have the pro and standard photography modes, along with some decently powerful manual controls.

Video tops out at 8K at 30fps or 4K at 60fps, which is right up there with other flagships.

While the 7S Pro is geared towards gamers, camera enthusiasts won’t feel too hard done by here either. The overall image quality isn’t as good as the best flagship cameras but it’s more than good enough. The only thing I’d like to see different in the camera setup is the 2MP sensor replaced with a telephoto lens.

The Nubia Redmagic 7S Pro is a stunningly powerful handset with a host of features geared towards gamers and power users. It offers something different in terms of design and features that will appeal to gamers and those looking for one of the most powerful Android phones you can buy right now.

The specifications are off the charts with my review unit having 18GB of RAM which seems like overkill and 512GB of storage that will take some time to fill although games are getting bigger.

If you’re into mobile gaming the 7S Pro should be on the top of your list.